Consider a stream of data that we receive, call them

element in the stream. Note that we receive every

time step and that

is then no more in our access once we move on to the next time step. Furthermore, we don’t even know the value of

. How can we possibly uniformly sample an element from this stream? When I first thought about this, I was completely stuck; I couldn’t fathom any such procedure; to me, it just felt wrong that we needed to gain a uniform sample over

samples without even knowing

However, as the title implies, one method to accomplish this is called Reservoir Sampling. I’ll first introduce the mechanics directly, and don’t be discouraged if it doesn’t make sense since it can be quite non-intuitive at first. Before we delve into the mathematics, I recommend you take a look at this post, especially the basics of probability theory.

Development of the Theory

First, we let our stream be

and we start by seeing

and continue all the way to

In other words, we keep a reservoir sample and switch it to the current element we are reading with probability inverse to the current timestep, and the variables

simply are the state of the reservoir at different timesteps. We claim that

is a uniformly distributed random variable from the sample space of all the stream elements. And in fact, we define

as our sample from the stream.

Now what confused me the most was that the probability that

, but then somehow we concluded the probability that

. Seemingly confusing, right? We may select

timestep; however, we forget that we still need to not select the rest of the elements in order for

. That part about not selecting other elements weighs into proving that

is uniformly distributed, and now we will see this in motion formally. I will provide a rigorous proof first, and then a more intuitive argument afterward.

as we have, we claim

Proof: We prove the claim by induction on

. First consider the case of

where then we choose the first and only element of the stream with full probability, so obviously our selection is uniform.

, and assume the claim for the stream

to the stream, so our stream is

as required. The second line is by Conditional Equivalence (details can be found here), the third by the independence of the reservoir’s state at a previous timestep, and the fourth derived from the inductive hypothesis. Furthermore, by definition we know

. Thus we have shown for all

is an uniform sample from the stream

as claimed; thus proving the correctness of Reservoir Sampling.

A more intuitive approach, although less rigorous, is by writing

which is essentially the probability we select

and then never select any other element of the stream. We can simplify: 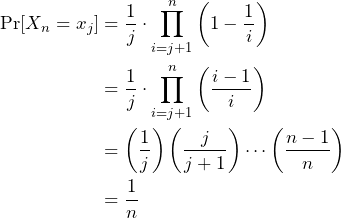 as required, so we have shown that

is uniform. This isn’t rigorous since we haven’t had a chance to discuss the relations between the random variables in order to get that initial product, and we never need to delve into that with our proof by induction.

Now we generate a stream of 1,000 elements whose distribution is depicted in the following histogram.

Now after sampling 10,000 elements by the Reservoir Sampling, we arrive at the following distribution of samples.

Notice that the distributions are almost identical which verifies the uniformity of the Reservoir Sampling in practice.

I encourage you to try this for yourself and witness the power of Reservoir Sampling.

Practical Use of Reservoir Sampling

Common in most Streaming Algorithms, we tend to assume our stream to be extremely large, so storing the contents of the stream in memory is simply not viable. For example, consider a stream of posts from all CS blogs; obviously, storing each one in memory is a waste of space, but with Reservoir Sampling we can sample one post uniformly with

if we decided to keep all the posts.

Furthermore, if we need

independent samples from a stream, we can Reservoir Sample simultaneously and independently, so we can get our

samples with only one pass through the stream. In practice, this method tends to be the preferred method of sampling as often we need more than just one sample.

Also, there are more applications of this principle of keeping a reservoir (the

samples) and replacing it with new stream elements as time passes, so look out for posts on this topic of streaming algorithms.